This sermon was preached on January 4th, 2015 at The First Reformed Church of South River, NJ. 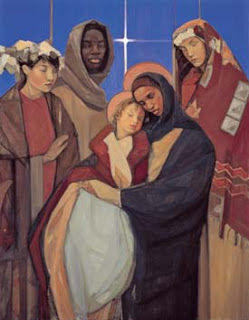 A few summers ago, I lived at St. Joseph’s Catholic Worker in Rochester, NY. For those who do not know about it, the Catholic Worker was founded by Dorothy Day and Peter Maurin in the 1930’s. They wanted to build a new society in the shell of the old. So they created houses of hospitality. Essentially, it consisted of a soup kitchen, shelter, community center–sometimes with a farm–all built into one. In Rochester, I was in charge of the clothing closet, meal tickets, and  laundry sign up sheet. When I wasn’t busy gathering toiletries or pants, I would sit, talk, and play card games with the guests. The work was exhausting, but inspiring and made me who I am today. Toward the end of that summer, I wanted to do something meaningful and very spiritual. So a few of us got together and planned to take a pilgrimage to a monastery 30 miles south of Rochester, called the Abbey of the Genesee. We knew about this place because they would donate bread to us every week. So on a Tuesday, after we were all done our shifts at 2pm, we began our pilgrimage walk to the Abbey. We took with us water bottles, flashlights, one cell phone, and a prayer book. Every other half hour we would walk in silence. By the time it hit 4:45am, we were all tired, worn out, and extremely cranky. We found some large boulders and rested there for a quick 10 minutes. When we got back up, I started to hum the lyrics Precious Lord Take my Hand, Lead me on, help me stand. I am tired. I am weak. I am lone. The others joined in. As we sang, it turned 5 o’clock, and we could hear the bells of the Abbey chime. We made it! Although, most of us had blisters on our feet, we started running. It was a joy to finally arrive to our destination on our pilgrim journey.

When I think of other pilgrims in Scripture, the Magi quickly come to mind. They travelled for months and not just for 15 hours as we did. When they arrived to Jerusalem, they assumed that they had made it, but later found out that they still had 6 more miles to go until Bethlehem, where the Messiah was born. Scripture doesn’t tell us the kinds of conversations the Magi had, but I’m sure there were some stressful ones. Some of them probably questioned if they really saw a star in the sky or if they were just delusional. I can imagine, since after 12 hours of being with the same people on the journey, you can start to wonder if you’re doing the right thing.

Last week, our Gospel reading from Luke was about the circumcision and celebration of Jesus as salvation enfleshed.
This week, we hear not of older men and widows, but of Magi.

The root of the word Magi means magic. In Acts, we read of Simon the Magician or Simon Magus in chapter 8, then another magician in the 13th chapter named Elymas. Translators in both cases either use the word magician or sorcerer. But when it comes to the birth story of Jesus, more often than not they’re called wise men. Or as we began our service, we sang “We Three Kings,” which is also just located in our Christmas imagination and not in Scripture itself. Because we don’t know how many Magi there were. But we can know by other translations that these were some kind of magicians or sorcerers, not kings or wisemen.

When they arrive in Jerusalem, they go straight to King Herod. And this makes total sense. Jerusalem is the seat of power. It has the Temple, the priests, the money, and this is where King Herod reigns. When the Magi show up, they were expecting to see the newly born King of the Jews.
But did the star take them to Jerusalem or were they just assuming this because this is where all the power comes from?
Did the star lead them there or were they questioning the star’s guidance?
Did the star guide them there or did they need to stop for directions because clearly the star is lost?
We’ll never know for sure, but there is something curious about them stopping in Jerusalem.

When the Magi shared with King Herod that they travelled so far to pay homage to the new born King of the Jews, Scripture says “When King Herod heard this, he was frightened, and all Jerusalem with him.” Why was everyone frightened? Because this is not how thing are suppose to go. Kingship is about being born into the family line. When these foreign sorcerers came into Herod’s court and told him that someone other than his child was going to rule, he would’ve had the overwhelming feeling that he is no longer in control.

Immediately, King Herod gathers his court of the scribes and chief priests and asks, “Where is the Messiah to be born?” They answer by quoting the fifth chapter of Micah to Herod, saying that he was to be born in Bethlehem.
After Herod knows the location, he calls a secret meeting with the Magi to learn when they exactly saw the star appear in the sky. He then tells them that they should send word back to him so that he too could pay homage.

Once the Magi left Jerusalem, they could see the star before them again, guiding them to Bethlehem. Then like that, the star stops above the house, not manger, to where Jesus and his family were. The Magi were overwhelmed with joy.
After this extremely long journey, they finally get to see the Christ-child.
When they entered the house, little baby Jesus was with Mary. They bowed before him and offered him those traditional (baby shower) gifts of gold, myrrh, and frankincense.
A few verses later, we hear of Herod’s horrible act of the killing of the innocents, all males two years and younger. So I wonder with the information given to Herod by the Magi, if Jesus was a little over 1 year of age.
Maybe Jesus was already walking by the time the Magi arrived.

And if it was over a year since they saw the star and started to follow it, the Magi must’ve given up a lot.
They would’ve forfeited relationships with significant others.
They probably didn’t always have a roof over their heads to stay some nights.
They probably thought about using their gifts for the Christ-child to get their necessities, but didn’t.
In a sense, the Magi were one of Jesus’ first disciples.
As the bearded adult Jesus will say later in Matthew, “Whoever wants to be my disciple must deny themselves and take up their cross and follow me. For whoever wants to save their life will lose it, but whoever loses their life for me will find it.”

This is exactly what the Magi did. And at the end of their journey, they received an Epiphany. Their journey was not in vain.

So what kind of journey are we willing to take this New Year?
One of my favorite Christmas songs is “In the Bleak Midwinter.”
In the last verse, we sing,
“What can I give him, poor as I am?
If I were a shepherd, I would bring a lamb;
If I were a Wise Man (or Magi), I would do my part;
Yet what I can I give him: give my heart.”
Knowing that not everyone is called to take a pilgrimage, or bear gifts.
We are, although, all called to discipleship: to follow Christ
sometimes in the most uncomfortable situations
sometimes in bearing a friend’s burden although it might keep us up at night,
and sometimes in loving our enemies, even if we have never met them.
Let us make our New Year’s resolutions, alongside the Magi, to go deeper into discipleship wherever Christ may lead.