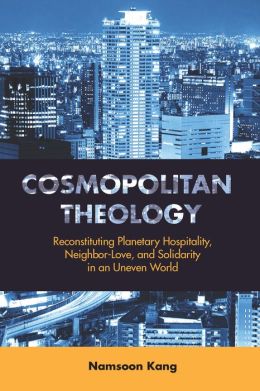 Namsoon Kang’s Cosmopolitan Theology represents a great feat for post-identity politics and theologies. It is a book of impossibilities, dreaming of new ways to theologize and work for justice for the entire world. For this project, Kang takes up cosmopolitan theory. Yet, like with any theory comes a set of responsibilities. Kang, channeling Deleuze, believes that theory must be constructed for new times, rather than the usual rehashing of past theories that perpetuate inequality. In the first chapter, Kang lists the major aspects and misconceptions of cosmopolitanism including: it is not liberal multiculturalism that uncritically celebrates cultural/ethnic difference but without commitments to making changes in sociopolitical power-disparities between differences; it is about unconditional hospitality, planetary solidarity and responsibility, welcoming the other, and cosmic neighbor-love (18). Cosmopolitan Theology constructs a theology unafraid of the Other, promoting neighbor-enemy-love, and diligent for a justice without borders.

The project can be split in three sections. The first defines the several meanings of cosmopolitan. Cosmopolitanism has been theorized by the ancient Stoic philosophers and more recently by postcolonial and cultural theorist Homi Bahbah and Gayatri Spivak. Among such diverse definitions, Kang further explains their uses in political and philosophical discourses. She demonstrates a vast understanding of their implications. For instance, Kantian cosmopolitanism categorizes persons according to their geographical and climate location, which according to him indicates their intellect and social standing in the world. As well, Taoism reversed the assumed divine hierarchical structures found in Confucianism for an equal divine utopia, where all are welcome. Henceforth, Kang constructs her cosmopolitanism as planetary-we-ness and solidarity-in-alterity (91). All humans must be responsible for one another because all are part of the same human family.

The next section focuses on the theories of trans-religious solidarity and the feminist theory of natality. For trans-religious solidarity, Kang proposes a way of radical inclusion and understanding of other religions. Currently, even with the more assumed tolerant ways of approaching religions seem artificial since there is little to no interaction between any religion. Rather, minority religions are treated as tokens and that they do not have anything to offer to the world. In addition, a view of tolerating other religions is always based on the terms of the tolerator (104). Kang aims for a trans-religious solidarity that allows for disagreement, encourages dialogue, and values an understanding that all religions do not have an absolute hold on truth. Natality opposes Western thought, which understands everything from the vantage point that all will eventually die. One has the possibility of having a few natal experiences, which were originally formulated by Hannah Arendt, with factual, political, and theoretical implications, which all open us to freedom. In this way, everyone is growing, changing, progressing, and processing. With respect to cosmopolitanism, natality grants us the opportunity to see the world-community beyond differences of ethnicity, ideology, and gender to viewing all as neighbor.

The final section proposes a cosmopolitan theological praxis. Threading through this section is a political-prophetic call for loving one’s neighbor as oneself. Furthermore, Kang’s ideal theologians are ones who cross boundaries, which is the same call Derrida put forth for philosophers. For Kang, the reader will discover, that theory must always interact and perform an action. Thus, when she is questioned as whether men can use feminist theory or if straight persons can write a queer theology, she claims an energetic yes (82)! This comes for the sake of the betterment of the human and Earth community. We must always push beyond the limits of our own identity to grant dignity for all persons. Cosmopolitanism is an ethic of responsibility in the face of an ever-growing uneven world. Thus, humans must dream the impossible vision of God’s kin-dom for the sake of neighbor-love and compassion.

Kang’s Cosmopolitan Theology challenges the status quo of contemporary theology. This opens a new field of theology that does rest on one’s identity marker, i.e. LGBTQ, Latin@, Black; instead, sorts them in the same category, cosmopolitan. In a certain sense, this has the possibility to create new theologies, ones more intersectional, yet at the same time, it could allow theology to remain as it is. In other words, the fields would open for anyone to participate in any theology, i.e. a white female writing mujerista theology, and this could dislocate once again those on the margins to continue without a voice.

The discussion on trans-religious solidarity was lacking in some respects. For example, I agree that tolerance is not enough in respecting other religions and not making them tokens. On the other hand, Kang does not give us the tools to deconstruct passages Christians use to exclude other religions (John 14:6), rather she states the verse, gives a vague hermeneutical approach (to de-Christianize the verse and to put it into a first-century context), and moves on (100). In the closing of the chapter, Kang promotes a softening of values for any given religion to emphasize the mutuality in the human family through cosmopolitanism. Agreed; religions must change their exclusivist notions, especially in the age of globalization and the Internet. However questions still remain towards the denunciation of religions for cosmopolitanism. Is then cosmopolitanism taking the place of religion? Is this not a kind of colonization, exactly what Kang fights against? Isn’t exclusivity the harbor in which religions stay afloat?

Overall the text creates new horizons for theology. Kang helps us to deconstruct identity theologies and envision them as “provisional, temporal, and partial and move toward a larger community of radical equality and boundary-less inclusion” (29). Cosmopolitanism embraces boundaries only to transcend them for a wider community. This text dreams big, and like Kang’s suggestion for other religions, this book is not the final truth on cosmopolitanism, but the very beginning of a wonderful new field of theology.