Like any new relationship, we set high expectations for the New Year. Of ourselves we determine that this year we will be fit, love more, find a new job, get out of debt, and the list goes on. These demands give way to disappointment and if we weren’t already anxious about the resolutions, we certainly are now for disappointing ourselves. I understand these moments of high anxiety as a symptom of capitalism. Economic theorist and philosopher Karl Marx explained, “Modern bourgeois society, with its relations of production, of exchange and of property, a society that has conjured up such gigantic means of production and of exchange, is like the sorcerer who is no longer able to control the powers of the nether world whom he has called up by his spells.”* 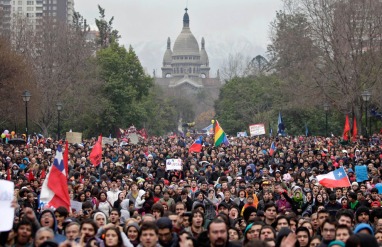 Marx knew that capitalism was out of control. That it was far too big and there was an “economic and political sway of the bourgeois class.” In capitalism, it is the overlords, the CEOs, the bourgeois that control the means of production as well as politics, ideology, foreign relations, and culture. Back to my main argument: how does capitalism create anxiety? Simply, persons without the power: the workers, the proletariat, “the least of these” acknowledge, at least subconsciously, that they are under the control of bosses, cops (who use force to sustain the capitalist system), and patriarchy.

Hence we demand high expectations of ourselves because this is the only way we can relate to the world. This is all that we know. We live in an America of bosses beyond bosses, cops beyond cops, and a stock market as our conscience! Possibly, to relieve this symptom, we need a high dose of an egalitarian community. Jon Grinspan wrote an Op-Ed for the New York Times titled, “Anxious Youth: Then and Now.” To summarize, the anxiety in Millennials is nothing new or creative. Even in 1859, young persons were concerned about their love lives, when to get married, and if they were ever going to find a job. Here’s a gem from the article:

“Another solution (from the anxiety) was to find like-minded young adults, to share, as one later put it in his memoir, their “baffling discouragements and buoyant hopes.” Nineteenth-century young people were compulsive joiners. Political movements, literary societies, religious organizations, dancing clubs and even gangs proliferated. The men and women who joined cared about the stated cause, but also craved the community these groups created. They realized that while instability was inevitable, isolation was voluntary.”

In the 21st century, we realize instability is inevitable, but we are too busy hiding behind screens. Of course, I believe social and political change and agitation can happen through the use of social media. Just look at what was accomplished two years ago with SOPA. Yet, this protest was particular to the internet.

Yet, we still need bodies!

We need them protesting, present at hearings, in Congressperson’s offices, and gardening. Our future depends on it.

If we direct our anxious energies toward housing reform, ending poverty, fighting for LGBTQQII+  and women’s right, environmental concerns and changing economic policy; something might change for the better!

*All the Marx quotes come from The Communist Manifesto, which was published in 1848. If you have never read anything by him, the Manifesto is a good place to start.