This series will interpret our beloved Christmas and Advent carols not as sentimental songs, but as a challenge to the status quo. Many of these subversive themes are already found in the lyrics, yet are often not pointed out. Enjoy the 12 days of Subversive Carols!

“The Friendly Beasts” by Robert Davis

In some Christmas circles, this song is on the margins or not known at all. The Veggie Tales perform a pretty fun version. In past youth ministry jobs, I have taught “The Friendly Beasts” and kids seem to love it. The only time I have ever encountered a problem with it was a criticism of calling Jesus our brother, apparently it lacks a high Christology. Researching this song I have found that it has some radical roots with the low christology!

Between the 5th and 15th centuries, festivals were conducted in the name of social revolution. These include the Feast of Fools, the Feast of the Ass, and the Feast of Asses. At Christmas, people chose the Lord of Misrule (England) or the Abbot of Unreason (Scotland). This person was a peasant, lacking political and social power. Because the medieval church wrote laws, dictated society, and was in cahoots with the State, these feasts dismissed the church’s authority.

“The Feast of Fools and the almost blasphemous extravagances in some instances associated with it have constantly been made the occasion of a sweeping condemnation of the medieval Church. On the other hand some Catholic writers have thought it necessary to try to deny the existence of such abuses.”

The feast of the Ass was celebrated on January 14th and recognized the Holy Family’s flight to Egypt. In their liturgy, a donkey entered the church and stayed by the pastor during the service. The congregation would “hee-haw” during their responses, e.g. “The Lord be with you. Hee-haw.” How does all of this relate to “The Friendly Beasts?” The melody originated from these festivals and was called “Orientis Partibus.” During the Festival of the Ass, these great lyrics were sung:

From the East the donkey came,
Stout and strong as twenty men;
Ears like wings and eyes like flame,
Striding into Bethlehem.
Hail! Sir Ass, oh hail!

Faster than the deer he leapt,
With his burden on his back;
Though all other creatures slept,
Still the ass kept on his track.
Hail! Sir Ass, oh hail!

Still he draws his heavy load,
Fed on barley and rough hay;
Pulling on along the road —
Donkey, pull our sins away!
Hail! Sir Ass, oh hail!

Wrap him now in cloth of gold;
All rejoice who see him pass;
Mirth inhabit young and old
On this feast day of the ass.
Hail! Sir Ass, oh hail!

Out of these radical and revolutionary festivals, we sing “The Friendly Beasts.” These festivals were democratic, carnival-like, and destabilizing to the current church hierarchy. Originally sung in praise of an ass, the lowliest of creatures. Our current version adds more animals and deems Jesus our brother. In other words, the high christology disappears for a Jesus whose Mother has to ride an ass to birth a child in a crappy manger.

One last comment, the animals speak in our song. They have language to engage the Holy Family. This draws away from the uniqueness of Jesus, and lends to the beauty of non-humans. 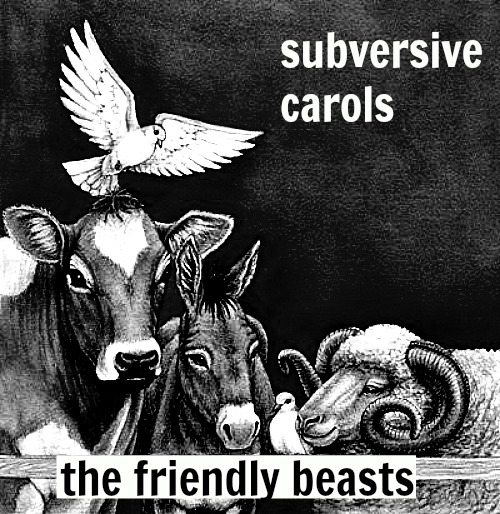