“I am suspending the name (of) “God” in scare quotes. That sends the (strong) theologians heading for the exits, because they are looking for something to save them, to keep them safe.” – John Caputo in The Insistence of God: A Theology of Perhaps (pg. 10)

In his sermon series on the Decalogue, Pastor Mark Driscoll of Mars Hill Church in Seattle wrote a blog post on the sixth commandment titled “Is God a pacifist?” The commandment, of course, is “do not murder” and is present in both Deuteronomy 5 and Exodus 20. To defend his personal position that Christians can kill, make war, and enact in, Driscoll’s favorite hobby, UFC wrestling, he goes straight for jugular and quotes an extremely violent passage in Revelation.

“Then I looked, and behold, a white cloud, and seated on the cloud one like a son of man, with a golden crown on his head, and a sharp sickle in his hand. And another angel came out of the temple, calling with a loud voice to him who sat on the cloud, “Put in your sickle, and reap, for the hour to reap has come, for the harvest of the earth is fully ripe.” So he who sat on the cloud swung his sickle across the earth, and the earth was reaped.

Then another angel came out of the temple in heaven, and he too had a sharp sickle. And another angel came out from the altar, the angel who has authority over the fire, and he called with a loud voice to the one who had the sharp sickle, “Put in your sickle and gather the clusters from the vine of the earth, for its grapes are ripe.” So the angel swung his sickle across the earth and gathered the grape harvest of the earth and threw it into the great winepress of the wrath of God. And the winepress was trodden outside the city, and blood flowed from the wine press, as high as a horse’s bridle, for 1,600 stadia” (Rev. 14:14–20).

Disturbing, to say the least. Yet, Driscoll’s Reformed/Neo-Calvinist hermeneutic, which sets all Scripture on an equal playing field, has royally mixed up these passages.* First, Driscoll writes, Jesus “is saddling up on a white horse and coming to slaughter his enemies and usher in his kingdom.” Nowhere in the passage, he cites, is Jesus riding a white horse. The only white horse references are found in chapters five and nineteen. According to the fifth chapter, Jesus is not even riding the white horse because he is located in heaven represented by the slaughtered lamb. In the nineteenth chapter, the rider on the white horse could be assumed to be Jesus. The rider slaughters those in the Empire, the ones who have power beyond power and the martyrs feast on them. Not trying to shy away from the violent imagery, it is the martyrs in the sixth chapter who demand justice for their spilled blood, which was done by the Empire. This fleshy feast fulfills this justice, according to Revelation.

Second, throughout Revelation, there is a kaleidoscopic representation of symbols assumed to be Jesus. Yet, in chapter fourteen, the son of man in the cloud wearing one crown probably isn’t him! Strictly thinking about crowns: when represented as a slaughtered lamb, he doesn’t wear any crowns. Then, the rider in nineteen wears many diadems. In addition, in a mocking fashion, the red dragon wears seven diadems and the beast from the sea sports a total of ten. A figure wearing one crown does not fit the normal representation of Jesus in Revelation.

Thirdly, the symbols of Jesus work autonomously compared to other characters in Revelation. In complete opposition to Jesus’ character, it reads,  “another angel came out of the temple, calling with a loud voice to him who sat on the cloud, “Put in your sickle, and reap, for the hour to reap has come, for the harvest of the earth is fully ripe.”” Thus, it should be understood that Jesus is not the son of man in the cloud. Jesus, thankfully, is not carrying a sickle reaping the world.

Of course, it begs the question, what are we to do with the violence in Revelation, even if it is not Jesus who is doing all the reaping or killing? Certainly, this is no easy task, and will take more than a blog post to handle all of the nuances and challenges found in the text. So I will point toward a few ways of reading Revelation. To begin, this text was written during the triumph of the Roman Empire by John of Patmos who was in prison. Violence was the imperial norm for his society, very similar to ours, and their artwork and mantras upheld this tradition. The violent imagery was seared into the minds of all. Therefore, how could John of Patmos not be expected to use it in his text?

Many of our biblical texts are counter-narratives. They turn the norm of their current society on its head. The same is true for Revelation. Although, it is hard for us to see because much of our culture is infused with biblical imagery, we cannot fully comprehend its topsy-turvyness. For example, in Revelation five, an angel cries out with a loud voice “Who is worthy to open the scroll and break the seals?” John openly weeps, but an elder comforts him saying ““Do not weep. See, the Lion of the tribe of Judah, the Root of David, has conquered, so that he can open the scroll and its seven seals.”

Isn’t this what we expect: a lion, strong, courageous, with a beautiful bold mane.

Yet, the lion does not respond to the elder or open any of the scrolls; instead, John writes, “Then I saw between the throne and the four living creatures and among the elders a Lamb standing as if it had been slaughtered, having seven horns and seven eyes, which are the seven spirits of God sent out into all the earth.” A bloody lamb opens the scrolls. In my mind, I picture this lamb to be constantly bleeding from the neck which never scars, its wool blood red, and taking shallow breaths, just to stay alive. This is counter-narrative at its finest. Among other things, this is what Driscoll doesn’t understand about the Bible: it is a multivocal, mostly anti-Empire, hope-filled text that challenges our very assumptions! One should not go lightly into reading the Bible, it takes courage! 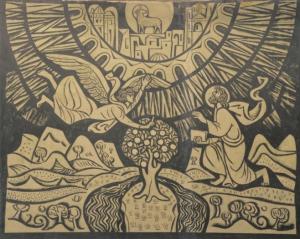 *Reformed/Neo Calvinist theology teaches that the entire Bible is inspired and inerrant. Everything from the genealogies in Chronicles to the parables of Jesus should be taken at the same dedication and seriousness. Consequently, they often create doctrines and dogmas by looking through the Bible as a whole for certain words or phrases that will give them the results they have assumed. Driscoll certainly does this in his post by barely touching on the historical context of the verse in the Exodus and interprets it through Revelation.

One thought on “driscoll’s misreading of revelation”