In sex, as in other things, we have liberated fantasy but killed imagination, and so have sealed ourselves in selfishness and loneliness. Fantasy is of the solitary self, and it cannot lead us away from ourselves. It is by imagination that we cross over the difference between ourselves and other beings and thus learn compassion, forbearance, mercy forgiveness, sympathy, and love—the virtues without which nether we nor the world can live. Sex, Economy, Freedom, and Community by Wendell Berry

Recently, I went out with a few friends who have preschool and elementary aged children. Our conversation overflowed with stories of their children’s engagement with the world. They shared stories of how their kids embraced the May Day pole ceremony and how they react to beat-bop jazz and heavy metal. As a Youth Worker I too have plenty of stories up my sleeves. My favorite stories are ones where the child’s imagination shocks my own sense of the world. For instance, I handed out bags to the elementary kids to fill with presents. The first boy took the bag and looked at it and said, “My archenemies, we meet again.” I wish I still had these kinds of interactions with inanimate objects! In the opening quote, farmer, poet, and activist, Wendell Berry makes the distinction between fantasy and imagination. Imagination is that which is in the communal conscience. Fantasy, on the other hand, is a solitary moment of one’s desires without recognition of the community. In the US, fantasy is commonly related to going to space or sexual acts.

Further researching imagination I came across Jesuit theologian Roger Haight. In Haight’s texts Jesus: Symbol of God and The Future of Christology (a smaller and less dense Symbol), he tips his hat to Thomas Aquinas’ thoughts on the imagination. Aquinas breaks down imagination in three parts:

First, everything that we learn about the world comes through sense data and the imagination. Like Aristotle and the British Empiricists, our minds are blank slates that are filled with our interaction with the world. This is in contrast to Platonism that says that we already have all knowledge we are merely wiping off the charcoal stains off our minds.

Second, this is similar to the first, that we can know nothing unless it has been received from the senses. All of our knowledge comes from what we perceive from the material world. Haight says that everything that we think has an “imaginative residue.” When one thinks of dreams, which are often imaginative new events, they are not so far out of this world that one can explain them to others.

Understanding this through Berry’s definition, communities experience the world in similar ways, which is their passive imagination. For their active imagination, communities construct  lexicons, habits, and relationships in particular ways. In the Christian tradition, this can be seen in the Gospels. The Johannine community culturally were Greco-Roman who used popular Greek Philosophy, aka Platonism, to speak of Jesus. Does this degrade John’s Gospel to lesser than God’s Word? Of course not! What it does show us is the deep importance of Jesus to their community. Around the world, Jesus and God  are known by different names. According to the liturgy in the Jesus Sutras of Eastern Asia, Jesus is prayed to as the Jaded-Face One. To be jaded in Eastern Asia means that to have experienced life to the fullest and thus be divine. 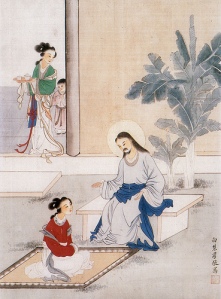 The problem today is we emphasize fantasy too much. We have an active fantasy life and force those desires on others. The work of imagination is found in the midst of community. Of course, this is not perfect, but if we are aware and intentional in our imagination-creations then possibly we can create a better and more just society.

How does your community engage with the other?

How do others perceive your community?

Christian communities around the world and throughout the ages gave the Divine a personal name. Has your community done this or have they used their experience with the Divine to add to God’s qualities?