The other week I came across my copy of Paul Tillich’s book Dynamics of Faith and decided to misread the title, thinking of it not as relating personality and faith, as Tillich did, but comparing it to expressions of faith. Dynamic represents the overarching ideology of a particular movement, denomination, political party, etc. For example, I have an anarchist dynamic, this includes my thoughts about the government, other humans, distributive justice, and so on. The expression of the dynamic is how I go about embodying my ideology. Therefore, my anarchist dynamic has influenced my expression to read about radical politics, protest unjust systems, boycott particular corporations, to garden, have vegan potlucks etc.

In the past month, I have been to two radical conferences, both in NYC. The first being the Left Forum. There was a wide variety of radical thought, including the Maoists, Marxist, Labor Organizers, and Anarchists. We gathered around a common cause: to help create a better and more sustainable world.

Then this past weekend, I attended the NYC Anarchist Book Fair. I met some great people, who were very passionate about issues of race, gender, political prisoners, and many other issues. With such a concentration of anarchists, I noticed specific patterns of dress, rhetoric, and style. Many of them wore darker clothing, mostly black, dark blue, and/or blood red. I was wearing a black t-shirt, blue dickies pants, and black Chuck Taylors. I fit right in. I, too, was able to fit in right away with my rhetoric of injustices happening in the world.

Maybe this is not a problem, since it happens in all social groups. Most charismatic Christians dress nicely to attend church, they too have a rhetoric of “Have you been saved or washed by the blood?” Many charismatics at least in the US support the political-economic structures in place and usually vote for the more conservative candidates.

Yet for Anarchists, I want it to be different. I picked up two different pamphlets from the book fair this past weekend and they described the genesis of anarchism in the Enlightenment. I am fine with this historical situatedness, since one of the early tenants was that rationality was part of human nature. Thus if all people are rational then all should want to desire freedom for all, and an end to oppression. This was an early idea of anarchist philosopher Pierre-Joseph Proudhon.

If we were able to see human nature more fluid then anarchism too would change. It would be more of a contextual, local, and allow for more freedom in different countries, or even in the same city! The Dynamic of Anarchism in West Philly may be expressed as free food for all, community gardens, more after school programs, chalk poetry, making other spaces open to the public for events, possibly even having anarchists who identify as Christian to write liturgy for their churches. We must push beyond the expressions that we normally act in and create with others a better world. Hopefully, this will include wearing more colorful clothing. 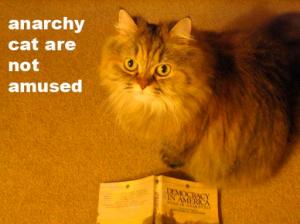 One thought on “anarchism and its discontents”