Paul Ricoeur, twentieth century philosopher, developed a way of reading called the “hermeneutics of suspicion.” Simply put, it is the concept that the way we read and understand texts (not only things written, but also spoken) must be challenged through conscience efforts. This means when reading a text, we must understand that we live in a context that influences our reading, as well as the authors (or speakers) also have their own context. The final goal of reading a text then would be to know our context as well as the writers and try our best to come with a good interpretation. For example, referring to the parable of the talents, the ministers in a country that follows capitalistic tenancies will normally emphasize the investment aspect of the parable or spiritualize the text. They will use the word talent as common English defines it, a special ability that one has and then bypass the last section when the servant condemns the master. If I were to use the “hermeneutic of suspicion” on these sermons, it would question if they had indeed used the entire parable for the sermon or just parts. It would question whether there is any historical context in accordance with the economics of the first century Palestine. Finally, I would ask about their influences on whether s/he thinks that God influences the world, and id they believe that God is the master in the parable.

Ricoeur’s hermeneutic is a well rounded approach to reading texts and listening to a speaker. Something that I did not add was that Ricoeur used the likes of Marx, Freud, and Nietzsche, whom he thought were primitives to this approach. We must go further than these authors and  towards an even more radical and inclusive hermeneutic, since they all ignored feminism, were hetero-normative, and even more, thought of universals rather having more contextual and subjective theories. Thankfully, postmodern theory has aided to a more inclusive hermeneutic, i.e. deconstructionism (this certainly is not the be all end all of hermeneutic).

Along with the idea that when we read texts we must be critical of both ourselves and of the text, it has gained momentum in conservative ideology (this does not mean that the neo-liberal ideology which is rampant in the world does not have its suspicions, especially of other political ideologies). In a recent debate, the issue of climate change was set before the Republican candidates. Rick Santorum said that climate change is

“an absolute travesty of scientific research that was motivated by those who, in my opinion, saw this as an opportunity to create a panic and a crisis for government to be able to step in and even more greatly control your life,”

This is not an example of hermeneutic of suspicion, but rather a falsification of another’s ideology. Santorum wants to bankrupt the scientific ideology by saying that when science wants others to conform to its ideas that it produces fear. The problem is that Santorum’s own capitalist, hetero-normative, patriarchal, and conservative ideology is using the same tactic (whether or not this is true of the scientific ideology). Santorum also in this debate says that he wants to get rid of the EPA so that there may be more “freedom” for capitalist businesses. In an upcoming post, I will share my thoughts on freedom and how we have a paradoxical view in the U.S. Therefore, Santorum believes in the negative definition of freedom, in which we are free from things rather than the positive definition where we are free for things. A good position would be that of the idea of the common good. For example, a neighborhood could take the position that “none are safe unless all are” and start a neighborhood watch that consists as neighbors taking turns walking around the neighborhood in he late afternoon in to the night. This freedom would show that freedom is only true when all are safe and able to pursue their own pleasures because they are free.

In conclusion, if one wants to commit to performing a hermeneutic of suspicion, one must also question their own ideologies and contexts. This is something that Santorum fails to do. We must try harder to question ourselves and others, while at the same time being humble. 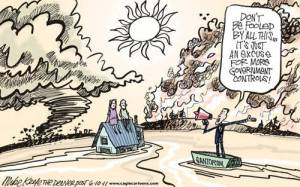